Welcome to the Stronghold, the home of the Vampire Crown series–
a collaboration between myself and Scarlett Dawn. A wonderful, dark world of vampires and druids, magic and bloodlust, hate and love, all tumbled together.

You’ll be dying to read more…

Warning: This series is not for the faint of heart. The Vampires and the Druids are a blood-thirsty magical race. Humans are their food source, and nothing more.
They will do anything to win their objective–anything.
So be prepared for bloodshed, sex, and evil plots.
You’ve been warned… Enjoy. 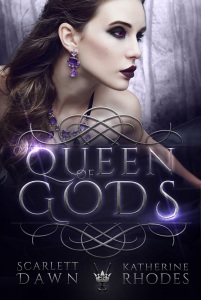 Magic is life.
Bound to S’Kir, the Unseen Gods wait to reunite with their brethren. Only an ancient prophecy keeps their hope alive.

Blood is life.
Locked away from S’Kir on earth, the Vampire Overlords and an Original Druid hold their crowns with brute power. The Law is all that keeps their savage nature hidden.

Until one defiant vampire is awakened early from her Rest and summoned to the vampire stronghold. In her wake, all hell breaks loose… 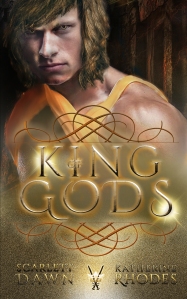 The bestselling VAMPIRE CROWN series continues with King of Gods, as the authors dive deeper into the chaos of Royal machinations. Dark schemes, rich humor, and carnal exploits weave this next installment into one gripping adventure.

The Breaking Time has come in S’Kir. The Spine is ready to be broken and reunite the races. But the Breaker is missing a critical piece of knowledge: Sex is power.

In the Stronghold, a new Queen has been crowned and the time has come for the King Novitiate to face his trials. While the Original druid thinks intimacy is his strength, the Queen knows better: Knowledge is power.

Sex will bring the power to the druids. But knowledge is the knife’s edge to carve out the power.

*CONTENT WARNING: This book contains graphic language and sexual situations. It is intended for audiences 18+ ONLY*

Life is war.
The Spine’s broken on S’Kir and there’ll be no reunification of the Druids and Vampires. Not while Savion, a bloody tyrant king, rules the vampires and seeks to subjugate the druids through whatever means necessary.

Love is war.
On earth, a newly crowned king, a coming war, and a romance for the ages threaten Queen Gwynnore and the Overlords ultimate plans—while they race against the countdown of doom. If only Gwen could keep a certain “devil” lord from killing everyone…

*CONTENT WARNING: This book contains graphic language, violent content, and sexual situations (M/F, M/F/M, M/M/M, and M/F/M/M). It is intended for audiences 18+ ONLY.*

Carnal. Primal. Twisted.
The bestselling VAMPIRE CROWN series smolders with intrigue and loyalty in the hidden realm of S’Kir. A mystery man slinks in the shadows, while a mad queen screeches her bloody demands in the burning light of day. S’Kir may not survive what lies ahead…

Terror is control.
With her secret parentage revealed, the newly-minted Princess of S’Kir has lost all hope of finding a new normal. Catapulted back into the horrors of war, she must face the insanity that is the reign of the Mad Queen.

Restraint is control.
The Queen of Vampires is in over her royal head within the turbulent dimension of S’Kir, but her determination is steady: find the Breaker. Even when she unexpectedly lands face-to-face with another Queen of Vampires—a woman as crazy as they come.

Terror is the herald of madness.
But restraint is the master of victory.