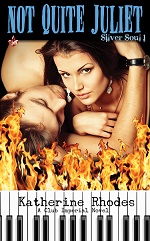 Presenting– The new book in the Club Imperial Series, Silver Soul 1: “Not Quite Juliet” 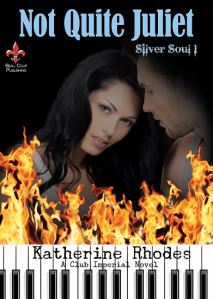 Silver Soul is a hot local band without big aspirations. Good boys during the day, bad asses at night, they play for the love of the music. They have all the requisite members: the hot lead singer; the wild and crazy bassist; the dreamy, laid-back rhythm guitarist; the animal on drums; the organized, behinds-the-scenes genius manager- and trouble on the lead guitar.
And, of course, fangirls.

Morgan Kirkbride is the self-professed super fangirl of Silver Soul. If they’re playing and she finds out, Morgan has to be there. One fateful night, by the grace of beer and peanuts, she falls for very hot, very sexy Nick D.Literally.
Morgan was sure the lead singer of Silver Soul thought she was a graceless flake when he asks her to a midnight diner and winds up back at her place. She’s captivated, but sure it’s just a crazy one-night fling…

Imagine her shock when the very next Monday at Allegheny County Courthouse, the highly respected, well-credentialed chemist Dr. Nicholas Dovadsky is called as a witness — and Morgan recognizes him as the rock god who rocked her bed. Sparks fly between them, but things get complicated – fast. But Nick doesn’t intend for anything or anyone to prevent him from getting to know the spunky, if clumsy, curvaceous woman. He just keeps coming back again and again.
When an ex-boyfriend returns to haunt Morgan and her roommate, no one takes him seriously. But when the simple threats become violent, perverse and horrifying, she realizes someone is out to get her. While nothing is what it seems, there’s one thing Morgan can be sure of…she wants Nick in her life. Permanently. Amazon: http://www.amazon.com/dp/B00JJARYYM
Goodreads: https://www.goodreads.com/book/show/21842290-not-quite-juliet